The name of the LORD is a strong tower; the righteous run to it and are safe. Proverbs 18:10 (NIV)

I wrote about walls in my last post, so, in keeping with an architectural theme, today I am writing about towers. I was reminded of this scripture verse during our worship service on Sunday after we had returned from a particularly trying trip to Italy. The last couple of weeks have been quite an ordeal.
When I think of Italy, especially Tuscany and Umbria, I think of its towers--watch towers, bell towers, defensive towers, leaning towers--they are everywhere in Italy.
During spring break I was in Italy on a group tour with my husband, daughter, her schoolmates, and some of their teachers and family members. What was planned as a special family time with our daughter became memorable for reasons we didn't choose, and the "family" time we experienced involved more folks than those people who share our name and our blood.
Our trip started with bad news and got worse. The day prior to our departure one of my cousins died unexpectedly, and I spent that evening weeping through grief-laden phone calls with family members and trying to learn details about funeral arrangements. Thus, I started the trip emotionally drained. The funeral was held while we were gone.
We flew to Rome and boarded a bus to Florence. The next morning we started our walking tour.


Florence is a beautiful, historic city, filled with art and architectural delights.  We toured the Uffizi Gallery again, after a 7 year absence, so that Kate could see it through her self-described "sixteen year old eyes".


After only two days in Italy, I received a call while in Florence from my only remaining family member on my dad's side telling me he was back in the hospital with pneumonia and complications from his cancer treatment. I could not fly home to be with him,  he started hospice care two days after our return, and I have since flown out to be with him and said a wrenching goodbye. He died yesterday.
On Monday of our trip we boarded our bus and traveled to Venice by way of Verona, where we visited Castelvecchio, an ancient castle built from 1354-1376 by Cangrande II della Scala, an ally of the Holy Roman Empire, on the location of a Roman fortress. Its seven towers, fortified walls, moat, and drawbridge, along with its bridge across the Adige River, were designed to protect him from his enemies and to provide a safe escape should the powerful families of Venice, Gonzaga, or Sforza attack. 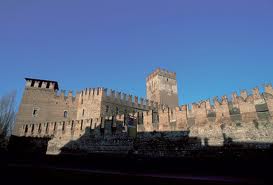 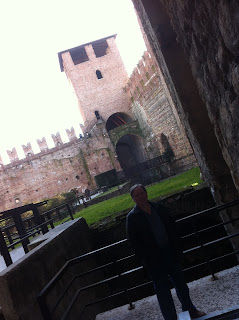 David at Castelvecchio
The castle is now a museum.
By Monday of our tour we were in Venice, and our daughter had become ill. Although she was achy and coughing, she was determined to make it to the Peggy Guggenheim museum to view works by her favorite artists. We pushed our way through the crush of the costumed revelers in the city for Carnevale and made it to the museum, but Kate was needing to stop to rest frequently. Riding the water taxis and breathing bitingly cold, damp air probably didn't help her condition.


She progressively worsened as we moved on to Assisi--a town that appears as a fortress from the road below.
By then we were looking for a pharmacy, and I was calling physicians back home for advice. The Italian pharmacist didn't have one of the medications I requested, sold me the wrong medicine and then wouldn't take it back, nearly sold me a substance that might have harmed my daughter, argued with me (through our tour guide's translation) about the antibiotic dosage, and finally sold me half the dose I requested.
I emerged from the pharmacy exasperated and anxious to give my daughter her first dose of the antibiotic. With much of our limited time already spent, we hurried to a coffee shop to get her a hot drink, only to discover that I had left my purse containing my passport, money, and credit cards at the pharmacy. I ran back in an absolute dither, hoping that no one had absconded with my purse. There's no telling what the pharmacist thought of this argumentative ditzy American woman physician!
The purse retrieved, we gave our daughter the medicine and then walked with our group to the Basilica di San Francesca, a place where the monks pray daily for peace. I was feeling anything but peaceful! There, six years earlier, I had sung with a choir on tour, experienced that peace, and participated in transcendent worship of our Lord through song. I was hoping for that peace again and for those with me to experience it as well.

In the upper basilica I followed my daughter with my eyes, watching her as she sat down and silently gazed-- enraptured-- at walls, ceiling, windows, architecture. When I quietly joined her, she whispered, eyes glistening, "I think this is the most beautiful place I have ever seen." Then, as we made our way down the stairs towards the lower basilica, she stopped, cocked her head, and said, "I hear singing!" Returning to the church we discovered that a choir had assembled, slipper quiet, and was singing a capella, their voices resonating off the ancient walls and lifting our hearts toward Heaven. We listened in awe and wept at such beauty. Later, a tender-hearted teacher joined us in a private prayer for our daughter's healing before we left that holy place. The power was in the prayer though, not in the place.
That evening we decided we would have to drop out of the tour activities to care for our daughter. She coughed most of the night. By morning, her temperature was nearly 103 degrees, and she was having trouble breathing, in spite of the ibuprofen and antibiotics she was taking. Nonetheless, we boarded the bus, headed towards Orvieto, and planned with the tour guide how we could find another pharmacy and, hopefully, obtain more antibiotic. While the tour guide went to the pharmacy for us in Orvieto, Kate leaned against the wall of yet another beautiful church and fell asleep!
Orvieto is a very ancient town on a high hill protected by walls and towers. People for centuries have sought safety behind those walls and in those towers. Beneath the city Etruscan tombs and tunnels wind through the bowels of the mountain of tufa rock. Popes and leading families used these tunnels to escape when threatened by danger.
The strongest tower and source of strength in Orvieto, however, was not located by the massive Duomo or up high on the fortified mountain. I saw it at the bottom of the hill where our school guidance counselor gathered the entire group to hold hands and surround Kate and pray for her healing and our peace. THAT was a strong tower--a tower of faith in the only One Who offers true safety, our Lord Jesus. It was the most beautiful sight of our entire trip.

From Orvieto we finally reached Rome where we retreated to our hotel room and put Kate to bed. After 16 hours of sleep, waking only for fluids and medicine, Kate finally woke with no fever. We were able to join the rest of the group for the final dinner in Italy and fly home the next morning.
One might consider our trip to have been a bust for us, but we don't think so. We learned that we have a family whose names belong on the family tree not because of DNA but because of Christ's blood given for us. This forever family of believers under the blood prayed for us as our brothers and sisters in Christ.

We also found that the towers of Italy, though visually impressive, crumble with time and provide no real protection from the true dangers of this earth. Though they were used by popes and paupers, whether they be caves deep in the earth or fortresses made of stone, they won't protect us from death or keep us from the judgment beyond this life. Our Lord, however, is a strong tower that we may run to and there find safety, healing, and rest. He is our safe haven forever, and our strength for the here and now. .."we trust in the name of the Lord our God." Psalm 20:7b (NIV)
12The Lord Almighty has a day in store
for all the proud and lofty,
for all that is exalted
(and they will be humbled),
13for all the cedars of Lebanon, tall and lofty,
and all the oaks of Bashan,
14for all the towering mountains
and all the high hills,
15for every lofty tower
and every fortified wall,
16for every trading shipb
and every stately vessel.
17The arrogance of man will be brought low
and the pride of men humbled;
the Lord alone will be exalted in that day,
18and the idols will totally disappear.
19Men will flee to caves in the rocks
and to holes in the ground
from dread of the Lord
and the splendor of his majesty,
when he rises to shake the earth.
20In that day men will throw away
to the rodents and bats
their idols of silver and idols of gold,
which they made to worship.
21They will flee to caverns in the rocks
and to the overhanging crags
from dread of the Lord
and the splendor of his majesty,
when he rises to shake the earth.
22Stop trusting in man,
who has but a breath in his nostrils.
Of what account is he?             Isaiah 2:12-22 (NIV)
Posted by Judy Googins at 10:16 PM No comments: Links to this post

Judy Googins
Tyler, Texas, United States
I am a Christian dealing with progressive vision loss, depending on The Light to guide me, and trying to be a light in a dark world.